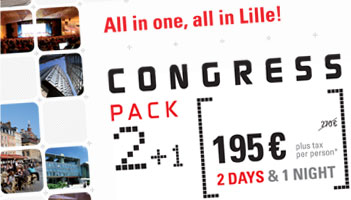 Lille Grand Palais has launched a special convention 2 + 1 deal which is valid for 10 specific weeks during the year. A two day one night delegate rate is on offer at 195 euro plus tax (reduced from 270).

Plus one hotel overnight

“The offer is already creating a lot of interest, especially at the major international fairs. We’re working together with the city’s Club Hôtelier to give our potential clients real value,” says David Herbeau, Lille Grand Palais Commercial & Operations Director

Spanish low cost carrier Vueling is the latest airline to set up at Lille’s Lesquin Airport. On 3 October they launched a new service to Toulouse with 6 flights a week.

A recent study by the region’s Project Center looks at the strategic positioning of the Nord-Pas de Calais and Lille in France, in Europe and in the wider world in terms of potential for consumption.

The conclusions?
In France: The potential for the Nord-Pas de Calais and Lille, within a radius of 300 km, is far superior to that of all other the regional capitals, ahead of Bordeaux, Lyon, Marseille, and Toulouse. More surprisingly, Lille’s potential is close to double that of Paris.

Lille shows in effect a potential purchasing power of 1,500 billion euro among a population of 78 million.

In Europe : The Nord-Pas de Calais and Lille are at the heart of the richest consumer area in the whole of Europe.

With 1,500 billion euros in potential purchasing power within a radius of 300 km, Lille ranks in first place amongst competing cities in Europe, ahead of Cologne, Brussels, Düsseldorf and even London which ranks 18th and Paris which is in the 32nd place.

In the World: Compared to the world’s largest metropolises, the Nord-Pas de Calais and Lille would figure at the heart of the top three population centres in the world and would also be the third richest consumer area .

These powerful figures speak for themselves and provide a solid platform for the future strategic planning and branding of international Lille….

PICOM a cluster where the future is bright and virtual

Nord-Pas de Calais is the French home of retail, mail order and distance selling, and all the top household names in the business are based here. It is therefore very appropriate that one of the region’s 5 research & innovation clusters is dedicated to developing distribution and retail, a sector which represents over 110,000 jobs. […]