Although Lille is not a capital, it’s one of the few metropolises in Europe with international headquarters based locally. A current business movement is to be global while remaining local. Lille is good example of ‘glocal’ because it is very easy to be international from Lille.

Mr Mariani points out two important trends he has identified in his role as business developer in Lille. First, is a strong decrease of business and employment creation originating from French companies in relation to foreign companies. “That is something is new for us. Before it was 50/50, now it is a lot lower. Also, we see that we have a strong presence of projects originating from Europe and North America, not only the US, but Canada too. Lille has strong assets to welcome foreign investors.” Mr. Mariani also adds that in the past two years he has seen increased competition with Paris, but a larger percentage of companies that originally targeted Paris in 2012 decided to locate in Lille.

As part of the global market, Lille is seeing growth in sectors such as food and technology. One particularity of the region, however is e-commerce, which is endemic to a region with such a rich history in trade and commerce. “On average, we have noticed that regarding all the cities in Europe the e-commerce sector in Lille is growing more rapidly than in other cities internally. Many European companies are locating their e-commerces office in Lille in order to grow.”

But history is not the only explanation for the boom in e-commerce. There is a population of young entrepreneurs who are creating new services and technology for commerce. Home to three of the top 100 business schools in the world – according to a recent survey in the Financial Times- as well the highest concentration of engineering schools in France, the city abounds in business-savvy and innovative young talent. And talent is a top attraction for companies looking to grow their business.

Welcome to my Lille by Luc Doublet

The consumer heartbeat of Europe At a time when companies around the world are developing new geo-marketing strategies to decide where to invest and set up operations, we needed to provide an up-to-date sales pitch for our region. So, together with the Nord-Pas de Calais Regional Council, we have undertaken some new research. The result? […]

Welcome to My Lille by Dominique Mariani

Lille Metropole’s Development Agency, APIM is another of Lille’s dynamic organisations. Created in 1995 by the Chamber of Commerce & Industry, APIM promotes inward investment and economic development projects in the region. Its new (since November 2011) CEO is Dominique Mariani who brings to the job a wealth of international business experience, as well […]

Welcome to my Lille by Philippe Vasseur

Philippe Vasseur is President of three powerful organisations in the Lille Region; the International Chamber of Commerce; the Réseau Alliances & World Forum Lille; and the Crédit Mutuel for the North. He was born in the Pas de Calais and worked in Paris for many years. But he studied journalism in Lille, got married here […]

Innovative textiles and fashions for the future The Lille Region is reinventing itself as the modern textile center of Europe. In October 2012 CETI, the new European Centre for Innovative Textiles was officially inaugurated in Tourcoing.  This multi-sector technology platform is dedicated to research and innovation in textile materials in such diverse areas as healthcare, […] 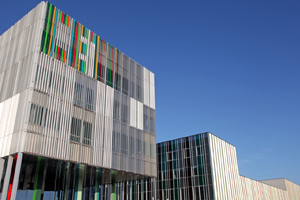