The thinking around the concept and creation of a new satellite Louvre began in 2003. In late 2004
Lens in the heart of French mining country was chosen from among six candidates in Northern France as host city for this spectacular new museum. In 2005 the Japanese firm Sanaa won an international competition involving 124 teams of architects and work started on the project in 2006.

Sanaa has created an easily accessible structure of glass and light which is both transparent and open to nature. The museum is set in a beautiful landscaped park designed by French architect Catherine Mosbach which will be open to the public throughout the day.

Unlike most museums, the Louvre-Lens will not have a collection of its own. Works of art from the Musée du Louvre will be lent to Lens for varying lengths of time. Programs will be coordinated between the two museums and, according to the themes chosen, works from Paris (currently either on public display or in the storerooms) will be exhibited in Lens on a temporary basis. The constantly changing exhibitions will allow the museum to display masterpieces, and keep public interest alive. 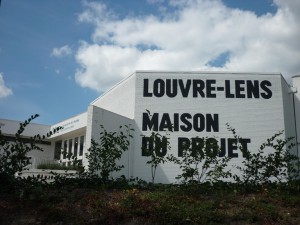 The new-style Louvre-Lens is on a smaller scale than its Parisian parent. It will be more accessible and closer to its visitors, as well as highly flexible in its choice of works and how they are presented using the latest in museum technology.

The Louvre-Lens has a large 300 seat auditorium, ‘La Scène’, for a wide range of cultural events, concerts, lectures, films…It will also double as a theatre for the local population.

There are over 325,000 inhabitants in the Lens-Lièvin urban area, and 100 million people live within a radius of 350 kilometres. The new Louvre-Lens should have no difficulty in reaching its target of half a million visitors a year. And we are all certainly looking forward to 4 December 2012

First-ever contemporary exhibition on the theme of the Tower of Babel. A reflection on the pride and folly of mankind through 85 monumental works by well known artists of today.
www.pba-lille.fr

A three month ‘Fantastic ‘ cultural festival with over 700 events which promises an experience of the impossible, the strange, the magical, the incredible, the subliminal, the supernatural……
www.lille3000.com

In a former Art Deco swimming pool, this stunning museum houses a number of major collections – Fine Arts from the 19th & 20th centuries, Applied Arts (ceramics, fashion & accessories) and Textiles. It also creates its own temporary exhibitions around big names like Dufy, Picasso, De Niro, Chagall… The museum is not only used […]

This amazing museum of modern, contemporary and outsider art re-opened last September after a four year facelift. It has been completely renovated and extended, and now has some 4,500 works of art and a total exhibition space of over 4000m2. This is the latest step in Lille Metropole’s policy of making the best of culture […]