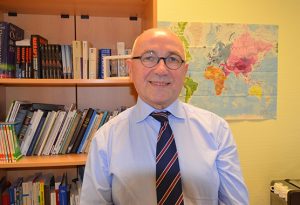 Thierry Sarrazin, Head of the Medical Physics Department at the Oscar Lambret Centre, tells us about the upcoming SFPM conference, which will focus on “21st-century imaging in radiotherapy”. 500 people are expected at Lille Grand Palais from 10 to 12 June 2015.

“This is the third time we have organised a medical physics conference in Lille.

The first took place 25 years ago, at Nouveau Siècle. For the second edition, 10 years later, we moved the event to Lille Grand Palais. The interest was to benefit from a modular structure, with different sized rooms that would adapt to the development of the conference. Fully satisfied, we decided to come back in 2015.

In addition to its very operational structure, the other advantage of Lille Grand Palais is its accessibility, and its proximity to the city centre without the inconvenience. Lille is also a major city, located in the heart of Northern Europe, very close to major European cities, and also an undeniable interest in supporting people.

European or international conferences target destinations with known and recognised tourist attractions. In Lille, conference organisers can find human and technical skills, and a dense and complete hotel network. The cultural and festive aspect is also a real asset for the destination.

With regard to our scientific field and the theme of this conference, technological advances in the field of medical imaging, radiotherapy and X-ray dose control for diagnostic and therapeutic purposes are essentially American: patents, research, developments, etc. Also, we have equipped ourselves with the CyberKnifeand the latest tomotherapy equipment: state-of-the-art machines that allow the training of all the teams in Lille that have this equipment in Europe. Our expertise in teaching and research in this field is recognised, hence the choice of the city of Lille for this Scientific Conference which will have many guests and speakers from all over Europe.

The teams of Lille Grand Palais always demonstrate professionalism which continues unabated. The relationship of trust was quickly established. We know where we are going and it is very reassuring to know that Lille Grand Palais will be at our side. “ – Thierry Sarrazin