Opened in Dec 2012, the Louvre-Lens has already seen well over a million visitors and is fast becoming a prime attraction in greater Lille. We spoke with its Director, Mr Xavier Dectot, to find out why it’s so popular.

A Room with a View
One of the things that makes the Louvre-Lens special is its architectural design, where glass walls open onto an expansive 20 hectare park, but more unique is its exhibition approach. Mr Dectot explains: “There are 205 pieces in the Galerie du Temps. They are not separated into department, as they are at the Louvre, but are in one space, accentuating not what divides and separates, but what unites humanity. A very original part of Louvre-Lens is the fact that visitors can see our reserve collection and the restorations, which are done in full view of the public”.

Syngergy with Lille
When asked about the museum’s relationship with Lille, Mr Dectot replies: ”One of the strengths of Lens is its synergy with Lille, in terms of transport and in creating a more expansive offering because one visit to Louvre-Lens alone is not enough to bring visitors who come from far away to the region… the proximity to Lille therefore is a valuable asset”.

Visitors from near and far
The Louvre-Lens has got off to a fantastic start with 900,000 visitors in the first year, nearly 30% more than anticipated. One-fourth of the visitors came from abroad : “We had more than 70 nationalities, the most represented were neighbouring countries: Belgium, England, Germany, and the Netherlands. But we also had people who came from much further: Canada, New Zealand, the United States, China, and Japan”.

The Disasters of War. 1800-2014
The upcoming temporary exhibition, Disasters of War 1800-2014, opens May 28th, on the centenary of the outbreak of the First World War. Combining ancient, modern and contemporary art, the exhibition focuses on a particular angle of war. As Mr Dectot explains: “We do not want to show the artist’s glorification of war, but rather the artist’s point of view on the consequences of war on civilian populations… overall this will really be an exhibition on how the perception of war changed over the last two centuries; it will be a very powerful and innovative exhibition”.

The thinking around the concept and creation of a new satellite Louvre began in 2003. In late 2004 Lens in the heart of French mining country was chosen from among six candidates in Northern France as host city for this spectacular new museum. In 2005 the Japanese firm Sanaa won an international competition involving 124 […]

…asks the New York Times? The New York Times recently published a list of 46 Places to Go in 2013.  In 26th position, after Burgos in Spain and ahead of Changbaishan in China, come Lens and the new Louvre-Lens. Lens, an industrial town in the Pas-de-Calais region of northern France, is aiming to become the […] 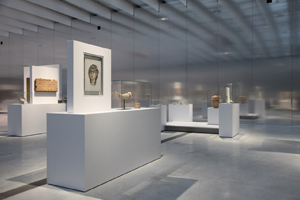