Welcome to my Lille by Jean-Claude Casadesus - Lille Grand Palais 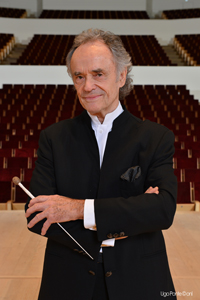 Jean-Claude Casadesus is Parisian by birth and passionate about music and his adopted city. He has lived and worked in Lille since 1976 when he became principal conductor-director of the ONL, the National Orchestra of Lille. In December he published his autobiography, ‘La partition d’une vie’ (The score of a lifetime) recounting a fascinating musical career.

Why Lille and why for so long?

I came on a temporary contract for the radio. It was a region with 4 million inhabitants and no symphony music. I wanted to be associated with the creation of a great symphony orchestra and the Mayor & Regional Council President Pierre Mauroy entrusted me with the challenge. We started from nothing. At one of our first concerts we had more musicians on stage than people in the audience!

Today we have an audience of 200,000 across the region and over 5000 with season tickets. We have a talented young orchestra with real class. In these 38 years we’ve created a flagship of French culture. We’ve played in 31 countries in the world’s greatest concert halls on four different continents. Here in the region we have performed in 250 towns and villages; we play in factories, hospitals, prisons and for people who are suffering or deprived.

For me Lille is an emotional trap. I’ve had the loyalty of the public and the freedom to build the musical company of which I’ve always dreamed. It’s a wonderful experience.

We have promoted the city as far away as China and Japan….The French often think that living in the north is worse than Alaska. It’s simply not true. This region has real human qualities and as well as the youngest population in France. There’s a wonderful sense of culture here; people are kind, friendly, generous and they know how to have a good time and fun. It’s a great melting pot of social networks which blend together with energy and sensibility. My own personal philosophy has always been ‘shared emotions for everyone’.

The concert hall is the orchestra’s instrument like a Stradivarius for a violinist. For over 25 years the ONL didn’t have a proper place in which to perform. This new Auditorium for which we’ve waited 10 years has changed all that. When the musicians first came here, they said to me astonished ‘it’s just like playing abroad!’ The Auditorium has 1750 seats and some of the best acoustics in Europe.  It’s a tribute to the musicians themselves and their public.

There’s so much: the Musée des Beaux Arts, the second most important collection in France; the new Louvre at Lens; Lille 3000 and all its colourful festivals and exhibitions; our new Auditorium…this is one of France’s most culturally aware regions.

Then there are great Lille institutions like Meert where General de Gaulle used to buy his waffles and Le Restaurant Clément Marot in front of the Auditorium. And if you want to experience real northern friendliness, go to Café Le Voltaire in the Rue Nationale. The crepes are excellent….