In 2015, the World Federation for Hospital Sterile Sciences (WFHSS) chose to hold its annual conference in France. Over 1,600 attendees and 100 exhibitors from around the world convened at Lille Grand Palais October 7-10. Dr Christine Denis, president of the WFHSS, shared her experience of this singular event dedicated to the field of hospital sterilization and decontamination.

Every two years, a member country is selected to host the WFHSS annual conference, which brings together representatives from 60 countries to share best practices, and discover the scientific and technological advances in their field. In 2013, France submitted its first ever application and was selected to host the 2015 conference.

“The big question was where to hold the conference,” says Dr Denis. “The obvious choices were Paris, Lyon, and Lille. We quickly ruled out Paris due to the high cost of organization for us and of accommodation for our guests,” she explains. An obvious point in Lille’s favour was its proximity to Charles de Gaulle airport: the city centre is a mere 50-minute train ride away. The conference organizers worked with a public relations agency that suggested Lille Grand Palais. The multi-functional space accommodated 100 vendor stands in the exhibition hall, while conferences and workshops were held in adjacent meeting rooms.

Another motivating factor in choosing Lille was the city’s reputation in the health sector, specifically hospital sterilization and decontamination. France is a thought-leader in the field and Lille is home to its most advanced sterilization facility, which conference attendees from around the world took the opportunity to visit.

The conference is an important event for hospital sterilization and decontamination professionals the world over, who play a key role in limiting the spread of nosocomial infections in medical facilities. The French model, which has taken sterilization out of the hospital basement and created high-performing industrial facilities, has set a standard that the world is eager to follow.

Feedback from the conference has been positive on the whole. Dr Denis cites the level of scientific excellence and diversity of speakers as contributing to the conference’s success. “In past years, we’ve had a very European audience. This year we had many more visitors from other regions, including Asia and South America,” says Dr Denis. Lille Grand Palais’ convenient location and the city’s role as hub for innovation in hospital sterilization and decontamination certainly contributed to a healthy turnout that exceeded the 1,200 expected attendees.

The keynote speaker at the 6th edition of the World Forum Lille which took place at Lille Grand Palais Convention Centre on 14-16 November was Jeremy Rifkin, President of the Foundation On Economic Trends in Washington DC. He is also author of the best-selling ‘The Third Industrial Revolution’ which has been endorsed by the European […] 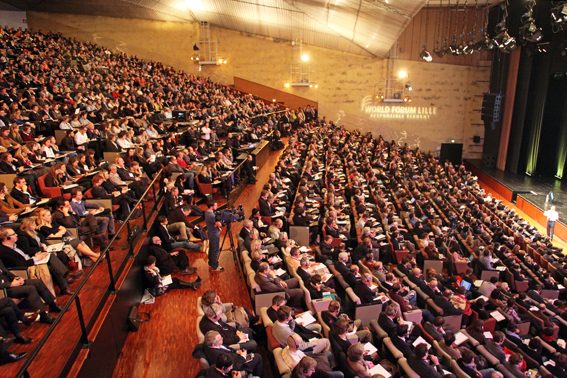